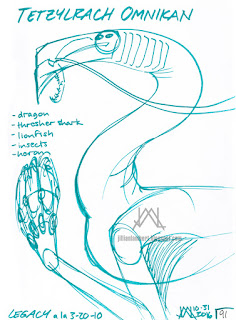 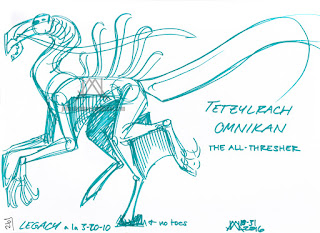 Tetzylrach's earliest design (above) was heavily inspired by the Aeons of FFX.


Tetzylrach Omnikan (tet'ZILL rock OM'neh can), the All-Thresher, is charged with dispersing the souls of the departed from the mortal plane. They work closely with their sibling, Ersphe, to ensure safe passage. Unlike their siblings, who may use feminine or masculine pronouns, Tetzylrach prefers strictly neutral pronouns: they, their, them, or it(s).

Poor Tetzylrach was long overdue for a portrait drawing, but this was a bit rushed, seeing as I caught up on five Inktober drawings on Halloween this year. I decided to pull more of the heron influence into their design and gave them head and chest feathers.

I first drew Tetzylrach after a friend introduced me to Final Fantasy X in seventh grade. It had a HUGE impact on how I drew my fantasy world and its inhabitants. I haven't played it in years, but I had a 180+ hour game at one point! It's probably a good thing I don't play video games nowadays...
Posted by Jillian Lambert at 7:49 PM